Why saying NO can be such a powerful thing!

I think learning to say ‘NO’ can be one of the most empowering things in moving towards the health you want. I work with so many clients who say they have “no willpower”, “can’t stick to anything”.. along with lots of other things. Often (and not always) it boils down to people pleasing and not doing what they want.

Now, I’m not for a minute saying that it’s easy to go from saying yes to the things that are counter to your goals and suddenly taking charge, it takes practice, planning and consistency, and that’s one of the areas coaching can help.

I worked with a client recently who worked in an environment that was full of ‘temptations’ (his words not mine). He struggled to avoid the constant stream of birthday cakes, meeting biscuits and treats on offer. He told me that everything at work seemed to revolve around sugary snacks and over the 3 years he’d worked there he’d put on about 2 stone. He felt at a loss at to how he could make sustainable change in such an environment.
It was something he had tried to say no before but found that when he did say no people would make fun or keep going until he gave in…. saying NO was hard and we recognised that he wanted to take control and make change – having treats when he wanted, rather because he felt pressured or that he should.
We worked together on some other areas of his health and each week some strategies to give him confidence in what worked for his body and situation. He started to feel better and more in control of his health more able to say NO, because it wasn’t what he wanted. So, we practiced some ways he could say NO. I’ll share with you the sentence that he came up with for whenever anyone would not take NO for an answer…….
“I’m fine, thanks. I don’t want that because I’m overweight, on the border of diabetes and I’d like to see my kids grow up. I’m working on eating better and that’s just not going to help, but thanks anyway.” The more he said it, the more he owned it…. And guess what, saying NO became easy, people in the office became more supportive and stopped teasing him for not joining in – some even started eating better with him. 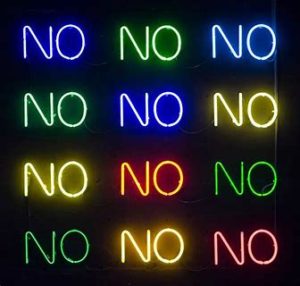 If you would like some help in changing the habits that are keeping you from the health you want, then Health Coaching may be for you. Drop me a line to find out how I can help you feel better, look better and take control.